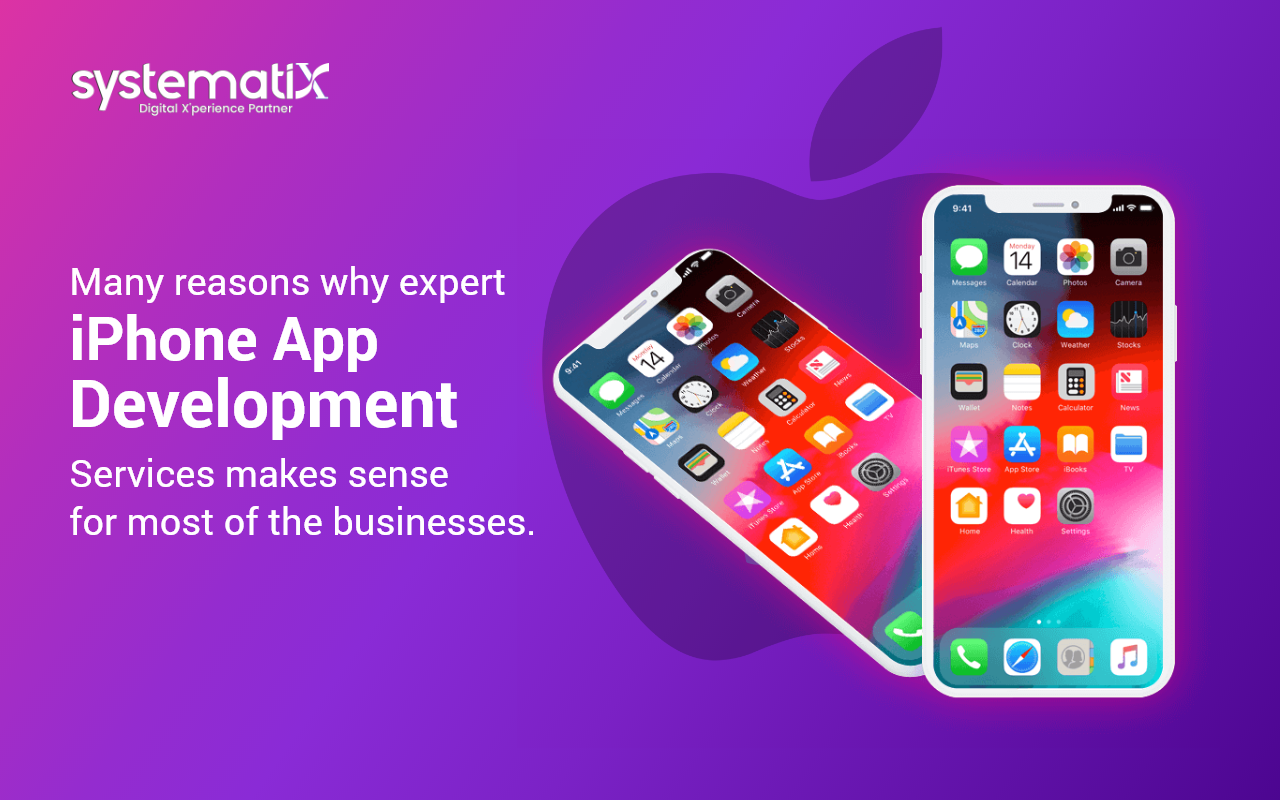 Apple has a specific tradition. Every year, in January, the leading tech giant discloses its statistics to showcase how effective the iOS and Apple apps are performing in the given year. The announcement for the given year indicates the immense penetration and popularity of iPhone apps or iOS apps amongst users across the world. As per the latest statistics, there are over 2.2 million apps in the App Store of iOS. When taken on average, around 2450 apps get released on the App Store almost every day. In Q2 2019, the App Store of Apple recorded total revenue of around $25.5 billion -80 percent more than the earnings of Google Play Store. The impressive statistics of iOS apps have a specific message. The iPhone app business is thriving and becoming people’s favorite at a rapid rate. Businesses that look forward to capturing the market share in the field of developing iOS apps with help from a leading iPhone app development company can ensure a lucrative deal by investing in top-notch iOS application development services.

It is estimated that around 18 percent of existing Android users have also identified the merits of iPhone apps and later switched on to the iOS platform. iPhone continues maintaining its strong grip on the users by delivering consistent innovation and performance.

iPhone apps are renowned for their high-quality assurance and revenue-generating capabilities. This is the reason why startups, as well as seasoned businesses, are continuously investing in iPhone app development projects for meeting the respective business needs and ensuring a fast return on investment.

An Insight into iOS App Development

iOS or iPhone app development can be referred to as the process of designing applications for devices operating on the iOS operating system. These include iPad, iPhone, Apple TV, iPod Touch, Apple Watch, and so more. The core programming languages that are used for iPhone or iOS app development are Swift and Objective-C.

Swift is a multi-paradigm, general-purpose, and compiled language developed by Apple in the year 2014. Swift is regarded as the result of the latest innovations on high-end programming languages in coordination with several years of experience in building revolutionary Apple platforms. The language is high on demand while being easy and interactive at the same time. Objective-C serves to be a subset of the popular C programming language offering high-end object-oriented programming capabilities. Objective-C is known to focus on the concept of reusability of the code.

With the help of the right programming knowledge and expertise, a reliable mobile app development company can develop:

If the customers, employees, or partners of your business are amongst the millions of iPhone or iPad app users, then it is high time for you to engage in iOS app development. You can hire iPhone app developers having in-depth industry knowledge and expertise to deliver the desired outcomes.

As Swift has a run time in sharing with Objective-C, it is easy to incorporate legacy code into the updated apps. Swift is quite simple to learn & understand –even for individuals who are just starting out with iOS app development. As Swift tends to be faster, easier to use, and more secure than Objective-C, you can use it for developing iOS apps easily. For the best outcomes, you can hire professional iOS developers to use the programming language for your iOS app development project.

One of the major benefits of ensuring iOS application development for your business is its extensive collection of app development resources for the developers. Due to the process of standardization, consistency, and functionality of iOS app development, Apple is capable of releasing native libraries and APIs. These are available in the form of kits that are easy to use, feature-rich, and stable. The app developers can make use of the iOS SDKs for seamlessly integrating the application into the existing infrastructure of Apple.

The presence of extensive kits for iOS app development helps businesses and developers to leverage the built-in features into Apple Operating System. At the same time, it allows them to integrate third-party apps with great ease while designing apps for connecting to social media, using the native calendar or camera app, or automatically recording replay videos.

In the modern fast-paced world, there is competition all around. It is easy to fail and difficult to win. The app development industry is highly competitive. There is immense pressure and confusion due to immense competition in the market across the globe.

Additionally, there is no denying the fact that the confrontation of most apps with strict regulatory rules by Apple is not seamless at all times. A number of businesses are increasingly paying exorbitantly for the mistakes and negligence involved with ensuring the right measures for ensuring the success of the iOS app. This problem could be solved significantly when you hire experienced iPhone app developers from some reputed iPhone app development companies.

Here are some benefits you can observe for your business:

One of the major benefits of hiring iPhone or iPad app development services from experienced companies is that you get access to professionals who are adept at shaping your iPhone app as you like it. Technical expertise in the field of coding and designing an iOS app will ensure that the apps remain crash-free and error-free.

While inexperienced freelancers or less experienced companies might appear fit for your iPhone app development budget, you will ultimately realize that the reality is totally different. Such service providers will seldom be capable of offering the wide range of features and perks as that of the experienced development company for the same price range.

For instance, when you hire app development services from an experienced company, the developers here will have detailed ideas on developing different varieties of apps –including educational apps, enterprise-grade apps, gaming apps, and so more. Every type of app demands different approaches when it comes to ensuring market study, analysis, design, and deployment. As inexperienced development companies tend to lack ample experience in the industry, they will mostly use the trial & error method.

Any business out there has to deal with several expenses –including employee salary, employee training cost, infrastructure maintenance, software cost, and so more. Moreover, hiring an inexperienced software development company might not even deliver the expected return on investments. As such, an increasing number of startups will be forced to continue using outdated technologies and tools without any returns.

An experienced app development firm is capable of bearing the cost of the incorporation of all consistent software updates. For instance, during testing, a reliable company can afford to test the application over a wide number of iOS devices or platforms.

Experienced app development companies ensure improved transparency of the respective identity and services. You can be convinced of their genuine services as they deliver improved safety for your project.

During and after the app development period, you can remain in constant touch with the development team. Moreover, you will also be able to know about every stage of progress in the app development process. As such, you are not able to contribute to the project by constantly giving your suggestions or thoughts.

Most of the experienced iOS app development service providers look forward to establishing a long-term relationship with the respective clients. Therefore, they treat the clients well and value them.

The team that is selected for the app development project is not working on any side project. This tends to boost the level of dedication app developers have to the given project by reducing distractions. Customer satisfaction is going to be the ultimate focus in the case of professional iPhone app development.

Developers having industry-specific knowledge will be capable of designing better applications featuring intuitive User Interfaces for iOS apps. It is imperative to leverage the latest technologies and effective tools to deliver world-class apps to the end-users.

With Android apps, one of the major risks is associated with intrusion into the sensitive enterprise-centric data of data that is lodged into the respective apps. On the other hand, upon comparing Android Vs. Apple, you will find that Apple-based apps are more secure. iPhone apps are capable of protecting firmware as well as software applications with the help of advanced security measures like:

iOS app development for businesses is incomplete until the applications are designed to go through the high-quality standards of the Apple Play Store before becoming available for the end-users. When the user will download the iPhone app, he or she can be assured of top-notch performance and improved user experience. The goodwill and trust in the legacy of Apple have helped in garnering a larger pool of loyal customer base for iOS applications.

Android application developers mostly make use of open-source libraries. Moreover, they also follow the non-standardized approach to developing mobile apps. This results in the development of applications that deliver improved user experiences on some devices and not-so-satisfactory experiences on others. On the other hand, iPhone app users are delivered amazing UX across the entire set of Apple devices.

It is one of the major USPs of Apple which also serves to be one of the primary benefits of iOS app development. There is no denying the fact that Apple is a pioneering name in the field of applications and modern technology. While 75 percent of users tend to be Android-centric, Apple still boasts a well-established clientele and customer base due to its unmatched quality and performance assurance.

#Applications for All Business Requirements

Brands across all sizes and scales have accepted the benefits of delivering mobile app experiences to the users. Consumers expect responsiveness and mobility from businesses they come across. This is something that users can easily find with respect to iPhone app development for enterprises. For businesses, mobile applications serve to be the perfect pathway to reach the target customers while being connected with them throughout.

iOS apps –whether they are off-the-shelf or custom-built, are made available to suit all diverse business requirements. iPhone apps are regarded as more profitable for enterprises because of the guaranteed market reach and variations in the app development process.

iPhone apps deliver improved Return on Investment in comparison to Android applications. When you wish to obtain the most out of the revenue generation strategies from your iPhone app development project, you can hire a team of professional app developers.

How to Hire the Best iPhone App Development Company?

Whether you opt for hiring a full-service agency or a team of a qualified iOS app developer, here are some factors to consider:

iOS apps deliver the assurance of improved profitability, customer loyalty, and visibility. Businesses can trust on the legacy of Apple to secure a prominent position in the highly competitive market. The secret to success is hiring a reliable Mobile app development company for improved results.